After Bill’s event (he prefers to call it that), he was given instructions to take it easy and give his heart time to heal.  So for a while exercise was limited to easy walks.  This was hard for him because he wanted to jump right in and make himself healthier in every way possible.  But he limited himself to our easy strolls and bided his time until he was given the green light to do more.  So that’s why this is stage 3 of the journey–this was the final, and essential phase to turning his life and health around, and making some miles down the road BACK!

After about 6 weeks of taking it “easy”, his cardiologist gave him a prescription for cardiac rehabilitation–3 days a week for about 3 months.  Bill considered himself in pretty good shape and didn’t think he really needed rehabilitation but was happy to comply.  He quickly learned he was very wrong and was  surprised by just how challenging nearly an hour of concentrated cardio really was!

And I was surprised for myself too!  The folks at rehab were really kind and let me workout in the adjacent wellness center during his rehab sessions.  The first time I got on the treadmill and really got my heart rate up, my chest began to ache.  This had never happened before!  I began to wonder what kind of condition my heart was in as well. 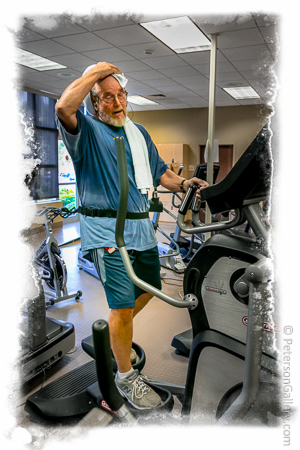 In a relatively short amount of time, Bill was amazed at how much better he felt.  Like so many people, he thought a lot of his stiffness and tiredness was simply a result of aging–just a reality he had to live with.  But voila!  He felt better than he had a in a long time, and thus encouraged he cranked up his effort to see just how much better he could feel.

Cardiac rehab was a great place to get started after a heart attack.  It provided a controlled environment–a safe haven–knowing his heart was being monitored at all times and there were qualified people all around–just in case.  With each session he pushed a little harder.  From stationary bike to treadmill, rowing machine to stair machine, he increased resistance and then speed and got his heart rate a little higher and a little higher and he could feel his heart growing stronger.

On most of the days when he wasn’t doing cardiac rehab, we walked and he did weight training and back exercises during my evening Pilates classes a couple of days a week.  In Dr. Crandall’s “Fix It” book he tells us to get an hour of cardio every day and that’s what we tried to do.  But let’s face it… with the getting ready, getting there, etc., it’s at least a couple of hours no matter how you turn it.  That’s a big commitment to devote that much time to exercise every day.    And as is often human nature, by the end of 3 months and rehab was over, Bill started mumbling about maybe now he didn’t need to do it every day.  And then, just at the right time, another book came into his life from yet another friend.  Karen said, “You have got to read this book!”

“Brain-rattling, irresistible, hilarious. If you’re up for it…[this book] could change your life.”

Bill really locked into this book!  And bonus, it reinforced Dr. Crandall’s message that if you want to avoid disease and make the most of the rest of your life doing all the things you love, you need to exercise every day.  Or at least 6 days a week, since let’s face it, something is going to interfere from time to time, and also your body needs a rest day from intense exercise.   Which doesn’t mean it’s okay to sit on your butt in front of the TV or computer on your rest day, you just fit in something light and fun, such as an easy walk, bike ride, or whatever you enjoy that keeps you moving!  And that is exactly what we have continued to do since.  We both signed up for the gym and enjoy working out together, and it’s helped motivate us to see the benefits in each other–in balance and strength and tone.

Six months after his heart attack, Bill felt like a new person.  He had followed the low-fat, plant based diet, he had exercised regularly getting an hour of cardio nearly every day, and he had wrestled his anxiety and stress into nearly non-existence.   It was time for a nuclear stress test to see how he was doing.  He aced the cardio portion of the test, and then we waited a couple of weeks to meet with the doctor to find out how the images came out.  Happily we were told everything looked “normal”.   Yay!  Normal is good!  At this stage, one of his two hypertension medications was eliminated and the statin was reduced by half.  He still needs to lose about 8 pounds and he will continue these lifestyle changes because it is his goal to lose the rest of his weight and get off all of his medications.  Getting off the rest of the medications will depend on the results of his lab work and Dr. Crandall has specific target numbers he wants you to reach.   I  believe Bill will do it!

I’ll continue the updates coming about our journey, sharing Bill’s progress (and MY progress!  I’ve lost 16 pounds so far) and heart healthy and yummy things I learn from recipes to tips.  As Bill says, we’re in training for our life’s third act…  And we’re excited!  We have halted the downward spiral we were on and life is getting better and better every day.