In the early, dark hours one Sunday morning in February, Bill woke me with what we thought was heartburn.  He’d been suffering with the same pain after dinner for several days that week, but this time it was different–for one it was the wee hours of the morning and now more severe.  As a precaution, he chewed an aspirin and we went to the emergency room.  Two hours later, I was sitting with him in CCU, now with the knowledge he’d had a mild heart attack and was the new owner of a stent in his LAD (left anterior descending artery), also known as the “widowmaker”.

We felt shell shocked.  Dismayed.  Depressed.  (And eventually grateful but that would come later.)  Dismayed because, like most people, we didn’t think this could happen to us.  After all, we exercised three days a week, ate reasonably healthy, took our vitamins, right??… but the fact of the matter is he was 40-plus pounds overweight and suffered a lot of stress.  We didn’t understand the toll those two things alone were taking on his health.

And we were depressed because we now had to accept the crashing realization we are not somehow protected by an invisible cloak of good health!  We were face to face with the reality we are susceptible to the same diseases as everyone else.  And worse, now there was a cocktail of prescription drugs–something we’ve seen affect our loved ones over the years with unpleasant side-effects, and something we believed we would avoid.

Now that our life was completely turned upside down, we began the process of educating ourselves– learning about the medications that had been prescribed, the lifestyle changes that needed to take place, and choosing a cardiologist.  We felt a bit like a ship without a rudder, trying to figure out the best direction.  We felt scared and we felt alone.  In the followup visit with the “luck of the draw”, emergency room cardiologist who performed the catheterization (and did a great job), there was no discussion of nutrition or lifestyle changes.   Basically he told Bill, “go home and take your pills”.  And expect to take these pills for the rest of your life.  Wow.  Talk about depressing.

As we talked about this later, we had so many questions!  Should we find a different cardiologist?  A cardiologist that shares our philosophy of an individual, holistic approach to treatment, rather than a cookie-cutter one that treats every patient the same? Is it possible to reverse the damage that had been done?  What would be the long-term benefits or damage from the medications?  Would he really HAVE to stay on them forever?  What diet should he be following?  How much and what kind of exercise is best for a person who has had a heart attack?

We wanted and needed more.  He had an appointment with his Primary that week for lab work, and he recommended his own cardiologist who had a great reputation as head of the heart unit at a leading hospital, so we made an appointment.  In his office, he patted my husband on the shoulder saying “You’re fine,” but again gave us no guidance on nutrition or lifestyle changes and repeated the same message as the first:  you’ll stay on the meds for the rest of your life. 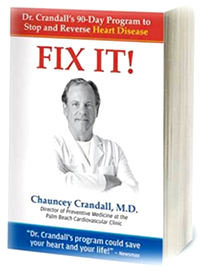 And then luckily, our friend Robert reached out and told us about  a cardiologist who he thought might be able to help, and this bit of kindness brought about new hope and a direction.  His name is Dr. Chauncey Crandall.  We began learning all we could about Dr. Crandall and discovered he had a different outlook than the other cardiologists we had consulted with.  He even had a book out called “Fix It” .    We got his book and as soon as we started reading we felt we’d found the guidance we were searching for and renewed hope.   We learned from his book that he nearly had a heart attack from a blockage in the very same “widowmaker” artery that required a stent, just like Bill, which meant Dr. Crandall had already lived what we were going through, and was following the program he lays out in his book.   Now we understood where we were headed–what we needed to do, and the changes we needed to make.  We seized the promise of restoring Bill’s health and hopefully reversing his heart disease and get him off as much of the medication as possible.  We finally felt like we had what we needed to take the reigns on a path back from a heart attack.  (And it turned out later I was also putting my own health on a much better track!)

So here we are.  Bill is nearly 40 pounds lighter and healthier than he’s been in probably a couple of decades.  He’s also happier than I’ve seen him in years!  Six months after his “event” as we call it, his nuclear stress test results were “normal”, his statin was reduced by half, he was able to stop taking the beta blocker and is taking only a small dose of an ace inhibitor.  The changes in his numbers on his lab work have been amazing.  Soon he will have more lab work done and hopefully more modifications to his medication.

And now we are grateful!  Grateful because we were smart enough to go to the hospital when we did.  Grateful because his heart attack was mild, but gave us the wake up call we needed to live better… a LOT better.  Grateful for a friend that reached out and helped us find guidance just when we needed it.  And grateful to have this second chance and a better life!  And that’s really what this site is all about–in case it helps YOU right when you need it.

So that is how our journey from heart attack to reversing heart disease began.   I will continue to share with you our progress, both the ups and downs, lifestyle changes, recipes we love, and tips I am learning along the way.   Next up along the route  is “The Journey Back” where we talk about the changes we’ve made so far.

I am not affiliated with Dr. Crandall or his book, or any other product that I might share on this site.  It was our feelings of uncertainty, fear and confusion that made me want to create this web site and share our experience.  Maybe it will provide a little hope to others that you CAN stop heart disease in its tracks, and possibly even reverse its damage.   ~Julie

“I was given a wonderfully working machine.. and I broke it.”

Why Fix It! Plan ~by Bill

If you've been cast upon the shores of heart attack island, wide eyed with disbelief and blinking in the glaring disorientation of the life altering impact of your event … welcome. Take heart there is a way back. 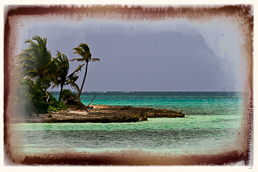 We're thinking there are others, maybe lots of others stumbling around in the sand, that want off the circular medical island of life after an event. Even an eminent event, puts us both in the same boat. You can regain the mainland and take the road back. If you really want to get back, to live, to improve, to recapture your sense of strength and freedom, it can happen. That's why we're here, hoping we can help.

We yearned for an escape from the despair, disorientation and weakness from the life altering state of my event. Almost from the first day, the finality of this is your new life, permeated the conflagration of emotions on this new shore. Glad to be alive, disbelief that I easily might not be, humbled by the ambiguity of hospital gown attire, grateful for the practitioners that are helping me and rankled by the conveyor belt journey I had begun that seemingly was a rubber stamp road. “Hey it's me!”... I insisted. I got patronizingly compassionate nods, even occasional pats of comfort and reassurance. Accept it, “oh he will,” it just takes a while. Yep, you're here now and it's not so bad, a nice island and safe enough if you handle yourself as prescribed. Hmmm, ok, I guess ... but what if I ... sigh.

What the Hell! There's got to be a better way than cowering around on Medication Island and waiting for the side effects of treatment and the lifestyle that got me here to deal the next card. Keep looking! Climb the coconut tree with binoculars and scan the horizon. Don't lift anything heavy, take it easy for a few months, try not to worry and come back in for some testing on blah-blah day. Heck I can't climb, but I've got Julie and she can. We're on the beach every morning stuffing messages into the Internet bottle, seeking a few confided in friends’ advice while discussing how lucky and grateful we are, and that accepting the situation is a good thing. She's back up the tree right after lunch; I toss the binoculars up to her.

Look, Look! There's a glimmer off to the east, just beside the rising sun. It grew closer and hope bashfully bloomed. There could be a way, maybe even (dare we hope for fear of disappointment) a rescue? A very special nurse had slipped us a name: A doctor with ideas not entirely of the island. A friend had opened his bottle and read our note. He himself a doctor of a different sort, sent a boat and it glinted in the rising sun. It offered us passage back, to the promise of a better land ... with caveats. Of course-of course! ... quite expected, plz-please, show the way. And this friend is how we came to be paddling our way off medication island and on this path, on this breezy often hilly, sometimes difficult but always rewarding road back from heart attack. Join us if you can and welcome. ~ Bill